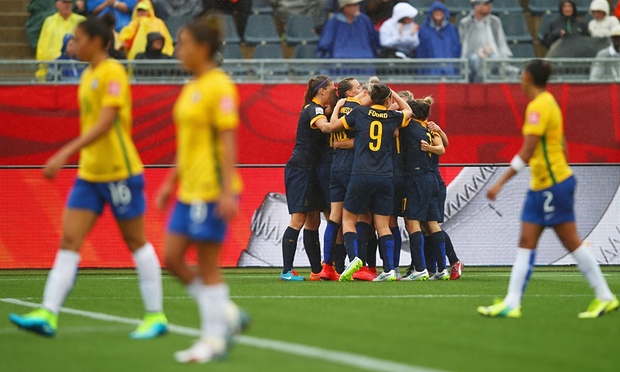 The knockout stages have begun in Canada in the 2015 FIFA Women’s World Cup with some surprising faces heading to the quarterfinals. Powerhouses like Germany and France made their way into the next round, but Brazil will be heading home after a stunning loss to Australia. Canada and China also advanced over the weekend. The US will have their shot to advance on Monday with a date with Colombia in Edmonton, AB.

The weekend and knockout stages kicked off in Ottawa on Saturday with Germany easily handling Sweden 4-1 in a matchup of two teams among the pre-tournament favorites who went in different directions once it began. Celia Sasic scored two goals for the Germans while Anja Mittag kicked off the scoring in the 24th minute with her goal. Sweden was able to mount some pressure in the dying embers of the game, but the Germans responded to the Swedes’ goal with a fourth of their own to put the game out of reach. Germany will face fellow favorite France in the quarterfinals after the French handled South Korea by a scoreline of 3-0 on Sunday. Marie Laure Delie scored twice in front of a supportive crowd in French-speaking Montreal to give them the victory.

Should the Americans win on Monday, they’ll take on China in the quarterfinals. China knocked out Cameroon on Saturday in Edmonton as Wang Shanshan’s 12th minute goal was all they needed in a 1-0 victory. Host Canada also advanced through a 1-0 victory, defeating Switzerland in Vancouver on Sunday. Josee Belanger provided the winning goal off her left foot in the 52nd minute. Canada will face the winner of England-Norway in the quarterfinals.

The big upset came on Sunday in Moncton, New Brunswick, as Kyah Simon came off the bench to score a 80th minute goal to give Australia the shocking 1-0 victory over Brazil. The Aussies not only survived the “Group of Death” with the United States and Sweden, but have now knocked out one of the strongest teams in the tournament in Brazil. Marta, one of women’s soccer’s brightest stars, was unable to do anything for the Brazilians as the Australian defense stood firm in the rain. Australia will now go on to face Japan or the Netherlands.

In addition to the United States’ big game with Colombia (8 pm EST) in the Women’s World Cup, Monday will also see England take on Norway for a quarterfinal slot in Ottawa at 5pm EST. Japan and the Netherlands will wrap up the round of 16 on Tuesday at 10 pm EST in Vancouver.

Read more about:
FIFA FIFA Women's World Cup Soccer
Listen to the uInterview Podcast!
Get the most-revealing celebrity conversations with the uInterview podcast!