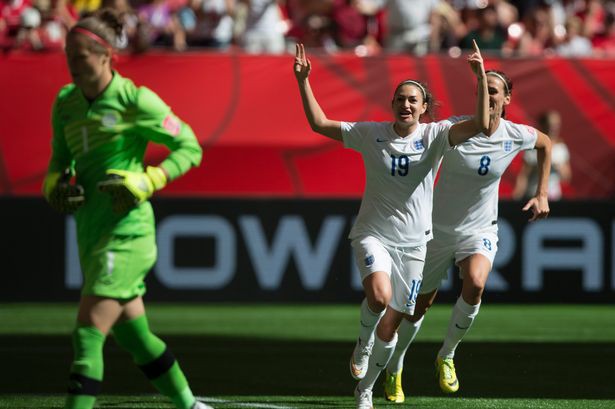 The semifinals are in place at the 2015 FIFA Women’s World Cup with a pair of intriguing storylines. On one side of the bracket, the US Women’s National Team will face Germany in a battle of powerhouses each looking for their third trophy in the event. On the other’s the breakout team of the 2011 tournament, Japan, and this year’s emerging power in England. On the line’s a trip to Vancouver and a date to play for the Women’s World Cup on Sunday.

The quarterfinal action got underway with a game that had all the quality of a final as Germany dispatched France in penalties 5-4 after playing a 1-1 regulation and extra time. Top seeded Germany fell behind to #3-ranked France in the 64th minute after a Louisa Necib goal, but recovered very late in regulation with a Celia Sasic equalizer in the 84th minute. After going through the extra 30 minutes, the game was decided in penalty kicks. Each of the first nine attempts between the two teams went in until German goalkeeper Nadine Angerer made the save on Claire Lavogez to send Germany through to the semifinals. In an astounding statistic, between the German men and women’s teams, the country has still yet to lose in penalties in a FIFA World Cup.

Joining them will be the United States, who looked improved from prior games in the tournament in a 1-0 win over China in Ottawa. Carli Lloyd scored the only goal for the Americans in the 51st minute. Although it was another close game for the USWNT, the offense looked much more free flowing than their play in the group stages and round of 16, which could bode well for the Americans in their matchup against Germany ahead. Hope Solo notched up her fourth straight shutout with her performance.

Reigning world champion Japan got themselves back into the semifinals with a 1-0 win over Australia thanks in part to their late efforts. Mana Iwabuchi came off the bench as a substitute to score the game’s only goal in the 87th minute and puts the Japanese in position to go for their second straight FIFA Women’s World Cup. Japan’s patient attack proved to be the difference, as they wore down the Australians as the game progressed. Energy ended up being the key in the scramble that led to Iwabuchi’s goal.

The weekend ended with another thriller, as England reached their first ever FIFA Women’s World Cup semifinal after taking out host Canada 2-1. England got off to a striking start with goals by Jodie Taylor and Lucy Bronze in the 11th and 14th minutes. The English then had to hold off a barrage of Canadian attacks, including Christine Sinclair’s goal late in the 1st half, as well as the loud support from the Canadian fans, to preserve the victory. The victory comes as a big breakthrough for English women’s soccer, as they’ve notched up their biggest victory yet and will play for a spot in the final against Japan. It also comes as a rare knockout stage victory for the soccer-crazed nation. The men’s team has only made it to the semifinals twice since 1960 and the women are just making it for the first time.

The United States and Germany will have their showdown on Tuesday in Montreal. Japan and England will then square off in Edmonton on Wednesday. Both matches will kick off at 7 pm.