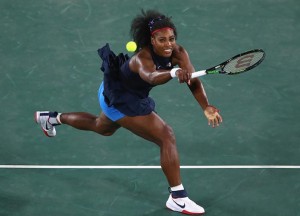 RIO DE JANEIRO, BRAZIL – AUGUST 09: Serena Williams of the United States in action against Elina Svitolina of Ukraine during a Women’s Singles Third Round match on Day 4 of the Rio 2016 Olympic Games at the Olympic Tennis Centre on August 9, 2016 in Rio de Janeiro, Brazil. (Photo by Clive Brunskill/Getty Images)