After the massive deal signed by Giancarlo Stanton with the Florida Marlins, uSports thought we should look at the five highest contracts in professional sports. Unfortunately, all five (or six) entries happen to come from the MLB, likely due to the fact that teams are given a luxury tax as opposed to a salary cap. It is also important to mention that this list is based solely on the size of the contract — not an athlete’s yearly revenue or endorsement deals — which means other athletes could be making more on an annual basis. So without further ado, here are the highest contracts in sports history. 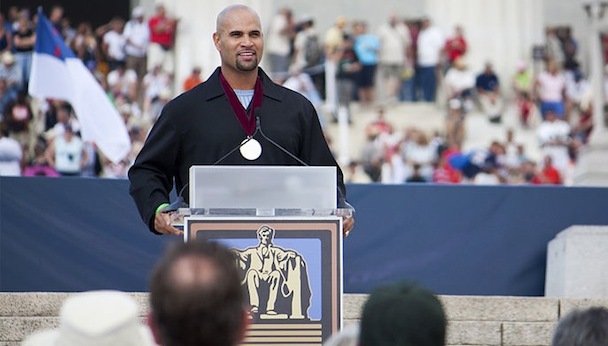 Albert Pujols was one of the biggest names on the market in the 2011-2012 offseason. So it was not shocking to hear that the longtime Cardinal was looking for money in the $200 million range. However, it was quite stunning to see the Angels give him that contract with a ten year deal worth $240 million. At the moment, Pujols has not lived up to the money, with him failing to register thirty home runs and a batting average over .275 in the last two seasons.

If you lived in New York in 2013, you probably heard about Cano’s monstrous deal in Seattle. The New York Yankees, who are still feeling the pain from signing Alex Rodriguez well into his forties, refused to give Cano the amount of years he wanted. Therefore, he said goodbye to arguably the greatest sports city in America and decided to accept Seattle’s ten year $240 million contract. Of course, Cano has proven that he is still a beast in Seattle — batting .314 with 82 RBIs and nearly topping his best OBP with .382 — but the big question is can he continue this consistency into his late thirties and early forties?

Got my glove out this week.

One can only talk about Alex Rodriquez so much, so we decided to lump together both of A-Rod’s ridiculous contracts into one entry. The infamous player, who is now more known for his off the field antics, first signed with the Texas Rangers in 2001 for the highest contract in history at the time: ten years for $252 million. However, the contract was then traded to the Yankees in 2004. Alex opted out of it following the 2007 season — a move that left New York’s front office very unhappy.

But with the help of “a managing director at Goldman Sachs,” he negotiated the new deal worth ten years $275 million. Now, it is quite hard to write A-Rod completely off because he was a large part of New York’s 2009 World Series run, but at the same time the injuries, declining numbers and steroid suspensions have made the second half of his Yankee career an extreme let down.

It is not hard to see why Miguel Cabrera was given the whooping ten year $292 million deal. He was the first triple crown winner since 1967, five time MVP and has not batted under .300 since 2008. However, it was quite shocking that Detroit gave him such a large deal with two additional years on his already existing contract, making many writers ask “has no one learned their lesson from the Yankees’ A-Rod or Angels’ Pujols deal?” With lingering injuries in 2014, Cabrera has seen some decline from his inhuman numbers. Only time will tell if he could live up to the money and keep up the statistics in his early forties.

Perhaps the most interesting aspect of Giancarlo Stanton’s deal — which makes Mike Trout’s six year $144.5 million extension look like chump change — is that he allowed the Marlins to backload his contract. This means that majority of the money will come after his opt out clause in six years; “should he opt out of his deal, he’ll have received $107 million over six years and be walking away from seven years and $218 million.” Reportedly, this was done so that the Marlins had some room to build a playoff winning team around him. If they do not, it is on Giancarlo if he wants to leave the $218 million behind.

Now, is Giancarlo Stanton worth this money? Well, the Marlins basically paid this amount because of his power. He has never batted above .300, but last season saw career highs in RBIs (105), Home Runs (37), Stolen Bases (13) and Hits (155). Best of all, Giancarlo — opposed to majority of this list — is only 25. Yes, the risk is still there, but the Marlins are basically paying for what could be his prime years.