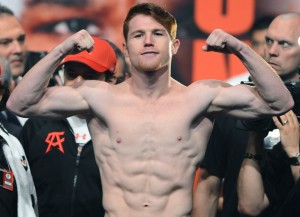 LAS VEGAS, NV – SEPTEMBER 13: Boxer Canelo Alvarez poses on the scale during the official weigh-in for his bout against Floyd Mayweather Jr. at the MGM Grand Garden Arena on September 13, 2013 in Las Vegas, Nevada. The fighters will meet in a WBC/WBA 154-pound title fight on September 14 in Las Vegas. (Photo by Ethan Miller/Getty Images)