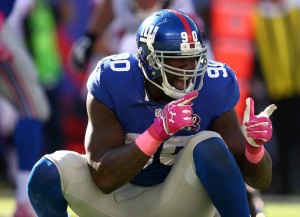 EAST RUTHERFORD, NJ – OCTOBER 05: Defensive end Jason Pierre-Paul #90 of the New York Giants reacts after a play in the fourth quarter against the Atlanta Falcons during their game at MetLife Stadium on October 5, 2014 in East Rutherford, New Jersey. (Photo by Elsa/Getty Images)