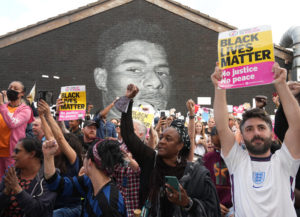 MANCHESTER, ENGLAND – JULY 13: People hold Black Lives Matter posters aloft as they gather at the newly repaired mural of England footballer Marcus Rashford by the artist known as AKSE_P19, which is displayed on the wall of a cafe on Copson Street, Withington, after AKSE_P19 came to repair today it after it was defaced by vandals in the aftermath of England’s Euros loss on July 13, 2021 in Manchester, England. Rashford and other Black players on England’s national football team have been the target of racist abuse, largely on social media, after the team’s loss to Italy in the UEFA European Football Championship last night. England manager Gareth Southgate, Prime Minister Boris Johnson, and the Football Association have issued statements condemning the abuse. (Photo by Christopher Furlong/Getty Images)