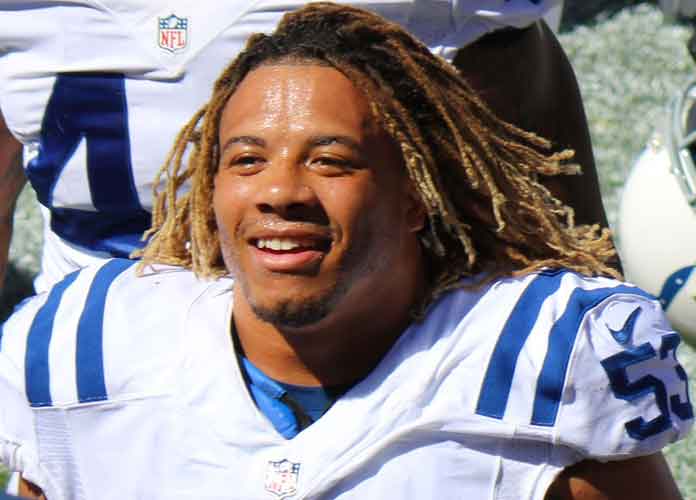 Jackson with the Colts in 2016 (Wikipedia Commons. Author: Jeffrey Beall)

According to several reports, the driver of the truck that killed both Jackson and 54-year-old ride-share driver Jeffrey Monroe is an illegal immigrant who does not own a driver’s license. The driver had reportedly been using the alias Alex Cabrera Gonsales, the police said in a release. Gonsales’ given name is Manuel Orrego-Savala, and he is a 37-year-old citizen of Guatemala.

Jackson and Monroe were stopped outside their Lincoln 2018 on the shoulder of Interstate 70 in Indiana around 4 am on Sunday when a Ford F-150 pickup truck rammed into the pair, killing them both.

Orrego-Savala is currently being held in the Marion County (Indiana) jail while the police work with U.S. federal immigration officials and the toxicology report results are released.

It is with a heavy heart that we share the loss of one of our own.

Edwin Jackson always brought a smile to our locker room and the community. Our thoughts are with his family and friends during this difficult time.

“We were heartbroken to hear the news of Edwin Jackson’s passing,” the Colts said in a statement. “Edwin was loved by all in the Colts organization. We admired his outgoing personality, competitive spirit and hard-working mentality. He was well-respected among all with whom he crossed paths, and he will be greatly missed in our locker room and throughout our entire organization.”

The statement continued: “We also understand that another person lost his life in the accident, only adding to our sorrow on this day. We are shocked and saddened by this tragedy, and our thoughts and prayers are with the families of both men during this difficult time.”

Edwin Jackson loved the game of football and we’re thankful to have been a part of his journey. #RIP53 pic.twitter.com/jh8ALwX3SL

Jackson signed to the Colts practice squad in December 2015, and was placed on injured reserve in September 2017.

Just learned about the passing of one of my favorite teammates.. Always happy.. always uplifting.. always humble..he was a true shining light on this earth..Such an incredibly sad day for anybody who has ever been lucky enough to be around or befriend Edwin Jackson.. RIP Ed..damn pic.twitter.com/RxKoA8OQ9j

Our hearts and prayers are with Edwin Jackson’s family. Terrific young man, respected and liked by all. Rest In Peace, Edwin.

Your love for life, passion for the game & heart to serve was contagious. Continue to shine your light from above brother! We love & will miss you @edALWAYZwin. My heart & prayers go out to the Jackson family & to our @Colts family. pic.twitter.com/3n4yXmeEhW